From the house of Ricoh, comes the new and improved Pentax K3II, a successor to the Pentax K3 that was the flagship model launched in 2015.

The second version was released after almost two years. This midsized DSLR packs quite a few features for its price and has been tweaked to improve some of the features in the earlier version.

It is the first Pentax DSLR to boast an in-built GPS system and the pixel shift resolution system. It also has the shake reduction system for images with greater clarity. Though, it might sound a lot like the Pentax K3, we go through its features in depth to see how it fares.

So whether it is sports or studio photographs, day light or astro photographs, the Pentax K3 II aces them all. Here is our very own Pentax K3 review to help you understand the features and how it fares with the others in the competition.

The features you will love in the Pentax K- 3 II 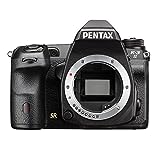 The Pentax K – 3 II is the first camera by Ricoh to have the pixel shift resolution feature in the sensor. The feature allows four images to be taken with a pixel width apart and combines them to produce an image that is of very high quality without an actual change in the resolution.

The result is a vibrant picture with a great deal of colour accuracy and a noise reduction effect. This is a great feature for shooting static objects.

The K3II has a KAF2 lens mount which has a whopping 141 native lenses to choose from and it is also compatible with all the Pentax lenses ever produced since 1975. You will be literally spoilt for choice.

As the K3II uses a sensor based image stabilization, all lenses also benefit that you mount on it also get the stabilization advantage. You also get to choose from 21 different lenses with weather sealing for a complete weather resistant shooting.

The camera comes with an in-built shake reduction system with 4.5 stops of stabilisation. This comes handy when you are shooting a subject in a panning motion. The anti-shake will make sure that there is no disturbance in any other axes other than the panning axis.

The auto focus system uses a 27 point, SAFOX11 system, out of which 25 points are of the cross-type which allow for faster focusing. There are options to choose from single, continuous of manual modes.

The continuous focusing system uses information from the 86,000 pixel RGB colour metering sensor for a superior AF tracking in the continuous mode.

The camera does not have an anti-aliasing filter that removes moire patterns by blurring or softening the images. Sometimes, the function of the AA filter becomes necessary and the Pentax K3II cleverly simulates the effect by using the pixel shift resolution of the sensor to blur the image slightly.

You can shoot videos with Pentax K3II at full HD resolution of 1920×1080 pixels and choose from different frame rates varying from 24 p to 60p. The microphone and headphone ports allow for a good quality audio to support the video.

The LCD monitor is fixed and has a large 3.2″ screen and a high resolution of 1,037k dots. The view finder is of the pentaprism type that allows for a 100% accuracy of images and has a 0.95bx magnification.

The built-in flash of the previous version of Pentax K3 has been replaced by the GPS. This in combination with the Astrotracer feature uses both location and the sensor shift properties to capture beautiful images of stars and other celestial bodies without star trails.

There are two slots for the memory card and since there is no in-built Wi-Fi, you can use a Flucard to connect your camera to Wi-Fi or the Eye-fi wireless cards that are memory cards with a wireless LAN function. This way you can share images wirelessly and also remotely control the camera from a smart phones and tablets.

The body of the camera is quite sturdy and is made of manganese alloy with 92 sealing points to ensure that it is absolutely dust and moisture proof. It is also cold resistant and can work very well in temperatures as low as -10C/14F. So you don’t have to worry about working in outdoor environments that expose your camera to fog, dust, sand, snow etc.

It is quite solid and does not make any internal movements while handling. It is also ergonomically designed to be easily gripped and its penta prism angled roof adds to its aesthetics.

The Pentax K3II has a high max continuous speed of 8.s fps which is much higher than those found on most DSLRs. This means it can quickly adjust to scene changes like in the case of sports photography.

The manual controls on the Pentax K3II have been designed to quickly adjust most parameters with buttons instead of navigating through complicated menu options. This becomes quite a handy feature over regular use and may not be for those who use their camera very rarely.

There is an extra LCD display on the top and a mode dial which is moved to the left for ease of use. A clever feature is that the mode dial comes with a lock to avoid accidental changes to your settings. The overall layout makes navigating all the controls easily but will require using both your hands.

The camera is equipped with a 3.5 mm microphone for audio capture. In addition to an AV output and a DC Input, it has a USB 3.0 port, an HDMI C (mini) port and an X-Sync PC socket.

The K3II takes only about a second to go from the power on mode to shoot mode. Also switching from play to record mode is quite fast.

What advantages does the Pentax K3II have over its competitors?

Both Nikon and Canon have DSLRs that compete with the features of the Pentax K3II. We have included the advantages that the Pentax K3II has over the rival models as part of this Pentax K3 review. The models being compared against the Pentax are Canon T6i and Nikon D7200.

The Pentax K3II has an in-built image stabilization system in its sensor that allows you to take shake-free pictures at low shutter speeds. Both the Nikon D7200 and the Canon T6i lack this feature.

The Pentax combines multiple images through its shift sensor to produce high resolution images that reproduce true colour and reduce noise. This feature is absent in both the competing Canon and Nikon models.

The Pentax is a peaker when it comes to highlighting what is in focus while its competitors are non-peakers.

With the in-built GPS feature, you can geo tag your Pentax images and trace them back to the exact location where they were shot. Both the Canon and Nikon lack GPS.

The Pentax has a much larger APS-C sensor when compared to the Canon T6i and allows for a greater angle of view.

The Pentax has a higher effective ISO of 11906 when compared to the 919 ISO of the Canon T6i. It also scores higher in terms of being able to shoot under low light conditions with an extended ISO of 51200 against the 25600 ISO of the Nikon D7200.

Even though the total number of AF points seem smaller on the Pentax K3II, 25 out of the 27 AF points are of the cross-type which allow for horizontal and vertical tracking and a much quicker autofocus performance. The Canon T6i has only 19 cross-type AF points while the Nikon D7200 has 15.

The Pentax is designed to capture more photos without running out of battery. You can get around 720 shots with the Pentax as opposed to only 440 shots with the Canon T6i. You definitely don’t want to be switching batteries in the middle of a shoot or keep multiple battery back-up batteries charged in your camera bag, let alone buying extra batteries.

The older models had a GPS that was slower and hence ate up a lot of battery charge. The GPS in theK3II is much faster and hence is easy on the battery.

You get more storage capacity in the Pentax K3II as it has dual slots for memory cards while there is no provision for a memory card in the Canon T6i.

The Pentaprism view finder in the Pentax is much superior than the pentamirror view finder found in the Canon T6i. Pentaprisms let you get a 100% accurate reproduction of the image that the lens captures.

The Pentax K3II beats both its Nikon and Canon rivals with its faster RAW shooting capacity of 8.2 FPS in the burst mode against a 4.9 and a 4.8FPS respectively.

The Pentax K3II has the lowest price when compared to similar models in the segment. A high features to price ratio is the winning factor for the Pentax DSLR.